Legislation that reverses onus of proof described as ‘a dangerous precedent’

NSW courts could be flooded with tens of thousands of cases every year if the NSW government moves ahead with plans to roll out cameras that use artificial intelligence to detect drivers using their mobile phones, a parliamentary committee has warned.

The NSW Council of Civil Liberties’ Stephen Blanks said there was no need to reverse the onus of proof if the quality of the photographs was high enough to rule out confusion about what was in a driver’s hand.

NSWCCL Treasurer, Stephen Blanks, spoke to 7NEWS Sydney in relation to the NSW Government's announcement to introduce a scheme for mandatory disease testing for people who expose frontline workers to bodily fluid. The proposed scheme would test for blood borne viruses including HIV, hepatitis B and hepatitis C. "Reasonable suspicion of a police officer doesn't really provide an evidence-based, medical reason for the action." 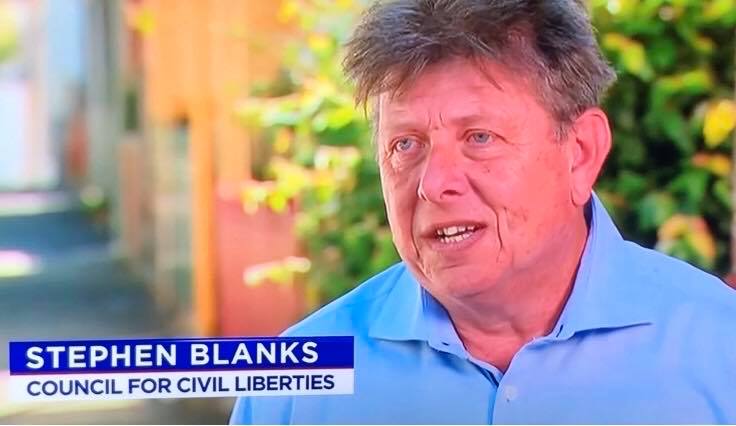 NSWCCL has for many years defended the rights of a free and uncensored press to ensure the public is sufficiently informed and able to hold those in power to account.

We support the statements of Ita Buttrose at our 2019 annual dinner that there are storm clouds gathering around the ways that information is controlled. Whistleblowers who bring stories to light must not be subjected to a public show of prosecution under the guise of national security, or be censored because their story may cause embarrassment or cost to those in power.

We believe that whistleblowers are not adequately protected in Australia. Particularly in the absence of a bill or charter of rights, specific protection should be enacted.

The state's former top prosecutor has urged the Berejiklian government to decriminalise the use and possession of illicit drugs in NSW as the "first step" towards full legalisation, as the Premier maintains her opposition to overhauling drug policy to allow a pill testing trial.

Nicholas Cowdery, QC, who was Director of Public Prosecutions in NSW for 16 years, said "any coherent government drug and alcohol policy must be based on health and social foundations, not on the criminal law".

"It is the only practical and principled way to proceed, [and is] also in accordance with human rights," he said.

Mr Cowdery, who is now president of the NSW Council for Civil Liberties, said "decriminalisation, in my view, is just a first step" and the state should eventually move to the "legalisation, regulation, control and taxation of all drugs".

Prime Minister Scott Morrison has sparked a furore over free speech by vowing to draft new laws to ban protesters from boycotting companies, prompting claims his "feverish" talk would curb the rights of all Australians.

NSW Council for Civil Liberties president Nicholas Cowdery said Mr Morrison's plan was "totally contrary" to the right to freedom of expression and that existing laws could deal with unruly conduct or assault.

"Large issues such as climate change and protection of the environment encourage strong responses by citizens whose broader rights are affected," Mr Cowdery said. "Protest action may well increase if effective measures are not taken by commercial interests to address those issues. Citizens should not be criminalised for taking such action.

"The Prime Minister says that they will take their time to get it right. No matter how long they take, they cannot get right wanton infringement of the rights of Australians."

One of the officers involved in the arrest of a teenager in the Byron CBD last year has been charged with common assault.

The extended delay in deciding whether or not to lay charges in relation to the incident has drawn widespread criticism of the NSW DPP, and the system more broadly.

The NSW Council for Civil Liberties described the delay as ‘unacceptable’.