Submission to PJSCEM Inquiry on Electoral Funding and Disclosure Bill 2018

This Bill will not deliver the reform to electoral funding that is urgently needed in Australia. It will however, deliver a devastating blow to civil society’s capacity to participate in political advocacy and to the broad freedom of political communication.

In addition, it proposes a clumsy, heavy handed, costly and overly burdensome approach to regulation of the charity and political advocacy sectors.

NSWCCL recently lodged a submission with the Attorney General’s Department and the Department of Communications and Arts in January 2017. We reiterated our view that the current metadata scheme is an affront to civil liberties and oppose its extension into civil proceedings. Extension of the uses to which metadata may be put is one of the reasons that we opposed the introduction of laws requiring collection and retention of metadata in the first place.

In our submission we noted the international experience, which suggests that metadata rarely makes a difference in criminal investigations.

Win a ticket to 'An evening with Edward Snowden!'

We are looking forward to attending an Evening with Edward Snowden in Sydney, which is being staged by ThinkInc. NSA whistleblower Edward Snowden will be appearing via video link.  We are running a competition for supporters who are yet to join CCL. The first 2 supporters to join CCL as members will receive a complimentary ticket to the event. Please email us at [email protected] when you sign up as a member to enter the competition. Supporters and members may also obtain a discount on the ticket price by entering the code NSWCCL when booking. See you on the 28th!

In early 2016, a group of organisations and individuals formed and launched the Digital Rights Watch, an advocacy group whose mission is to ensure that Australian citizens are equipped, empowered and enabled to uphold their digital rights.

The coalition, which included representatives from NSWCCL, saw the need to form DRW in response to increasingly oppressive policy by the government in eroding the rights of its citizens online, such as mandatory data retention, website blocking legislation, industry code for online copyright infringement, and the constricting effects of the Trans-Pacific Partnership (TPP) on the digital rights of Australians.

The DRW is mobilising for various upcoming campaigns, and we are looking for any volunteers and supporters who are interested in joining with us to deliver a fairer, freer, internet for all Australians!

Join our action group to participate in the dialogue or check out the Digital Rights Watch website for more information on the initiative.

Got questions/comments on this exciting new campaign? Email us at [email protected] 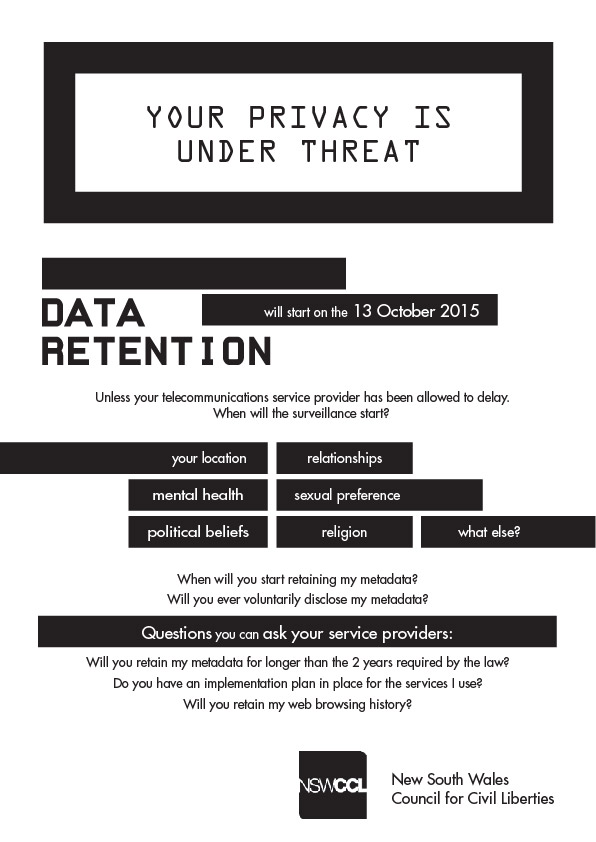