NSWCCL on the application of COVID fines by NSW Police

Some NSW police are handing out fines arbitrarily to people confused about COVID-19 restrictions, with "already over-policed" marginalised groups being penalised unfairly, a lawyer says.

Under COVID-19 measures, police officers have the power to fine individuals $1000 and businesses $5000 breaching public health orders or ministerial directions.

As of April 20, state police had issued 95 court notices and 736 penalty infringement notices, with on-the-spot fines, since March 17.

And while some of these cases are for people legitimately refusing to comply with social-distancing measures, solicitor Peter O'Brien says people are confused about what they are allowed to do and are being penalised unfairly.

"The lack of real clarity from the political masters who put in place this legislation is leading to an arbitrary application in the streets. People are genuinely and sincerely not certain of what a reasonable excuse is," Mr O'Brien told AAP.

"I'm concerned it's being applied to people who are already over-policed, the mentally ill, those fairly marginalised in society, most of whom can't afford to pay those penalties," he said.

NSW Council for Civil Liberties president Stephen Blanks questions why some of these fines are in areas of NSW where no known COVID-19 infections exist.

"The ultimate purpose of these regulations is for protection of community health," Mr Blanks told AAP.

"There was a couple in Cobar who were fined for being outside their home. The police should take into account if the activity engaged by the couple did put the community at risk. I'm not sure there are currently any infections in Cobar."

Podcast interview: The Government needs at least 14 million Australians to download the COVID19 tracing app, and if we do, they've promised we could get some of our freedoms back.

So how will it work? What information of yours will it have access to? What will it mean for your privacy? We find out the facts on Covidtrace. 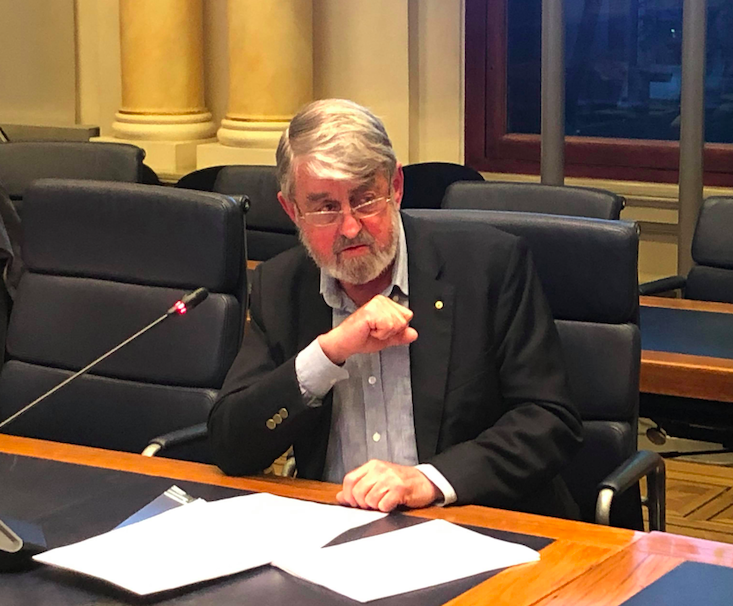 COVID-19 restrictions, NSWCCL calls for police to be restrained

The NSW Council for Civil Liberties has called on police to be more restrained regarding COVID-19 restrictions. "There is widespread community observance of the laws," said a spokesman for the council, Mr Stephen Blanks.

"If the police are seen to be enforcing them in a heavy-handed way, it will result in a loss of community support," he added.

Australian police have come under criticism for being too heavy-handed in enforcing social distancing rules after officers targeted mothers with babies and individuals sitting alone in parks.

Despite the rules being quickly and readily accepted by most Australians, there are concerns that the overzealous approach by some officers risk jeopardising community support for the measures.

The NSW Council of Civil Liberties has called for the state's chief medical officer to be consulted about fines issued under extraordinary laws designed to prevent the spread of COVID-19.

It follows concern that police may be issuing infringement notices to people who do not pose a risk of spreading the virus.

NSWCCL spokesman Stephen Blanks disputed whether going for a drive should be classified as an offence. "That activity has negligible community risk, of course there could be a risk if there was an accident, but it's very remote," he said.

"The experience of the past week suggests the commissioner should be getting some guidance from the chief medical officer of NSW as to whether particular activities involve community health risk."

Mr Blanks warned maintaining community support for the laws would be essential in the weeks and months ahead.

"It's unprecedented, the idea that everyone is confined to their homes unless they have a reasonable excuse to leave. The fact is there is widespread community observance of the laws, but the most important thing is the community support for them is maintained," he said.

"If the police are seen to be enforcing them in a heavy-handed way it will result in a loss of community support and will be counter-productive."

NSWCCL spokesperson 'As soon as it is safe for COVID-19 restrictions to be lifted, they should be'

A lockdown restricting the movement of people is critical to stemming the spread of COVID-19. The virus jumps from person to person after close contact, while it can also live on surfaces for long periods. By temporarily changing behaviour through physical distancing, people can slow the rate of infection. The practice has worked against outbreaks in the past, including the Spanish Flu of 1918. While the curve is flattening, experts say the virus cannot be defeated without a vaccine, which could still be 18 months away. Until then, social distancing will save lives by preventing a surge of cases overwhelming the healthcare system.

NSW Council for Civil Liberties spokesman Stephen Blanks said the restrictions were justified to keep the community safe from the pandemic, but that they should only be in place "so long as they are appropriate."

"These restrictions are extreme and extraordinary. We've certainly never had anything like this in our lifetime," he said. "When it is safe for them to be lifted, then they should be."

On Thursday (2nd April) Fuller said the NSW lockdown, supported by the enhanced police powers, would continue for 90 days, ending by June 30. He added that he would not seek to extend them. Berejiklian has confirmed the number of new cases has continued to stabilise, but said restrictions in NSW could be in place for as long as six months.

At this early stage in Australia’s experience of the global pandemic, it is hard to tell whether laws that dramatically restrict our citizens’ freedom of movement will be proportionate to the impending health crisis. Most medical experts agree severe “social distancing” measures are justified – for now – to prevent the rapid spread and devastating loss of life that COVID-19 has caused in countries such as China, Italy, Spain and the US.

But their impact on civil liberties and the rule of law has advocacy groups concerned.

“I have never seen anything like this in my lifetime and I am not aware of any previous restriction on movement and basic freedoms, ever, such as we have seen today,” Stephen Blanks, a spokesperson for the NSW Council for Civil Liberties, told LSJ.

Blanks spoke to LSJ on Tuesday 31 March, the morning after the Public Health (COVID-19 Restrictions on Gathering and Movement) Order 2020 was signed into NSW law.

“There will be situations where people need to leave the home – not just to access services, but just to get out of the home,” Blanks said, indicating research by Women’s Safety NSW that has already reported a 40 per cent spike in calls for help to domestic and family violence services since the COVID-19 outbreak.

Blanks said he was also worried about the lack of oversight or accountability mechanisms for police enforcing the new orders.

“Am I concerned about police not enforcing the law appropriately? Yes, I am. There is a great danger when extraordinary powers are given in an unconstrained way to authorities. It will take great discipline on the part of the police, and great management by police of people on the ground, to try to minimise any abuse of these powers.”

The shadow attorney general, Mark Dreyfus, has called for parliament to continue to sit and scrutinise government emergency powers to deal with coronavirus, as concerns about unchecked executive power in Australia grow.

The call on Wednesday comes as the bipartisan delegated legislation committee resolved to establish an inquiry into non-disallowable instruments including new Covid-19 public health orders, citing research by the legal expert Andrew Edgar that they are putting federal government actions beyond the reach of parliament.

The New South Wales Council for Civil Liberties president, Nicholas Cowdery, has urged the commonwealth and NSW parliaments to resume before August and September, warning the current extended adjournments are “unacceptable and dangerous for democracy”.

Cowdery wrote to the federal and NSW governments and opposition, warning that the current adjournments of parliament were “unacceptable and dangerous for democracy”.

He cited the constitutional law expert Anne Twomey, from the University of Sydney, who has warned that “there will be very little parliamentary scrutiny of the government for nearly five months, a critical period during which extreme powers may be exercised”.

“Even the darkest days of the world wars did not force parliament to close for extended periods,” Cowdery said.

NSWCCL President on democracy and accountability during COVID-19

The president of the NSW Council for Civil Liberties, former NSW director of public prosecutions Nicholas Cowdery: "Even the darkest days of the World Wars did not force parliament to close for extended periods."

He called on the federal and NSW parliaments to make use of their committee processes for "more democracy and accountability in these difficult months, not less".

A group of former judges is also urging Australia's parliament to set up a bipartisan committee to scrutinise the government's epidemic responses as it faces one of the longest shutdowns on record.

What are your rights as Australia goes into stage three lockdown and authorities begin enforcing stricter social distancing restrictions?

Rights groups have called for Australians to understand their rights as social distancing restrictions ramp up and new penalties are introduced to enforce them.

The message from authorities is don't leave your home unless absolutely necessary - that means going to work or school if you can't do it remotely, buying essentials, seeking medical care or exercise.

Breaking the rules will now carry stiff financial penalties across state jurisdictions as police warn they are not afraid to enforce the measures.

NSW Council of Civil Liberties spokesperson Stephen Blanks told SBS News the measures are set to have a “most serious impact” on people's freedoms and fundamentally change the public’s relationship with police.

“The way in which they’re enforced is going to have a huge impact on whether the community continues to support these laws,” he said.

“The issuing of the fines must really be a last resort where compliance cannot be achieved any other way."