Statistics released by the NSW Bureau of Crime Statistics (BOCSAR) have shown a significant increase since 2014 in the number of people refused bail, and then later found innocent. There has been an increase of 30 per cent in people denied bail, held in prison, and then later being acquitted.  In 2018, this meant 204 people, including 21 children.

Since 2014, there has been a significant increase in the number of prisoners held on remand, from a quarter of prisoners in 2012, to a third in 2018. Some adults had to wait over 500 days. The children had to wait an average of 124 days last year.

A person held on bail has been accused of a crime, but they have not been convicted. The hundreds of people who have been imprisoned for months – or even over a year – have been punished, and treated as though they are criminals, despite having done nothing wrong. It is unjust if anyone is locked up without having done anything wrong. This is what happens to people who are denied bail for offences they did not commit.

This issue has arisen as a predictable result of the 2014 amendments to bail laws. To protect the liberty of innocent people in NSW, the government should return to the bail laws passed in 2013.

A tale of two bail law reform processes: the 2013 reforms

In 2011, the Liberals won the NSW election. Attorney General Greg Smith SC, a former prosecutor, decided to begin a process of reforming the harsh and complex bail regime in NSW, then operating under the Bail Act 1978 (NSW). He asked the NSW Law Reform Commission to look into reforming bail laws in June 2011. They issued a report in April 2012. The report was based on 19 consultation meetings and 40 submissions. It found that the bail laws were “convoluted”, “restrictive”, confusing and inconsistent.

Broadly, the report recommended that detention be used as a measure of last resort. It proposed a range of reforms, to ensure that innocent people were not unnecessarily detained. The Premier Barry O’Farrell initially responded by ruling out softening bail laws. Yet in the end, the government recommended a bill to reform the bail laws in 2013. As noted by NSW CCL, the proposed Bill “did not merely rubber-stamp the LRC Report. The Act was passed unanimously – no politician, from any party, in either House, voted against it.”

The flowchart of the tests proposed under the changed Act give an indication of how it worked. The court was to consider if there was an unacceptable risk that an accused person, if released from custody, would fail to appear at any proceedings, commit a serious offence, endanger the safety of people in the community, or interfere with witnesses or evidence. If there was no unacceptable risk, the accused person should be released unconditionally. If there was an unacceptable risk of any of that happening, the Court was then to consider if those risks could be sufficiently mitigated by imposing conditional bail. 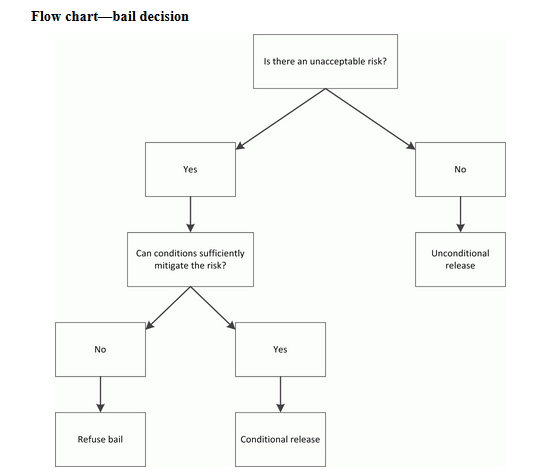 This system meant that bail was generally to be granted, and conditions should only be imposed to mitigate unacceptable risks. Where there were no unacceptable risks, the accused had to be released. A person could only be kept in detention where “the bail authority [wa]s satisfied that there is an unacceptable risk that cannot be sufficiently mitigated”. The laws also provided for offences where there was a right to release, such as fine only offences.

This Act came into force in May 2014. The process of legal reform had taken almost three years. Whilst the Act was passed in May 2013, a year was set aside before it came into force. According to David Brown and Julia Quilter, this was “to enable time for significant training, including the Judicial Commission of NSW’s bail scenarios and training sessions run by Legal Aid NSW across that state.”

A tale of two bail law reform processes: the 2014 reforms

Though the law came into force on 20 May 2014, by June 2014 the Bail Act 2013 (NSW) was about to be heavily changed. A media campaign against the new laws were run by the Daily Telegraph, Ray Hadley and the Police Association of NSW. They highlighted three high profile cases where bail was granted. These were Steven Fesus, accused of murdering his wife, Hassan Ibrahim, and two senior figures of different outlaw motorcycle gangs. The media accused the Liberal government of being “soft” on crime. On 27 June 2014, Premier Mike Baird announced a review of the new bail laws. He was concerned that “some recent bail decisions do not reflect the government’s intention to put community safety front and centre.”

The Liberal government entrusted the review to John Hatzistergos, a former Labor Party Attorney General. Brown and Quilter describe him as “possibly the most inappropriate person imaginable to carry out the review.” Hatzistergos was the “former Attorney General who presided over more ‘punitive’ amendments (Steel 2009) to the reformist Bail Act 1978 than any other, turning bail from a release mechanism that respected the presumption of innocence and the right to liberty into a mechanism for pre-trial punishment.”

When introducing his reforms to the bail laws in 2007, Hatzistergos said that NSW “now has the toughest bail laws in Australia.” Bragging about the “much tougher time” for serious offenders, he said:

Over the last few years we have cracked down on repeat offenders… These extensive changes have delivered results... The latest figures from the New South Wales re-offending database on bail decisions have shown that from 1995 to 2005 bail refusals in the District Court and Supreme Court have almost doubled, with an increase from 25.8 per cent to 46.4 per cent.

That is, Hatzistergos had a clearly stated and demonstrated preference for punitive bail laws. He handed down his report in July 2014, only a month after it was requested. It was made public on 5 August. According to Member of the Legislative Council David Shoebridge, the report was presented “with no public consultation and a limited group of stakeholders being consulted. Those stakeholders were largely from the police and the Government. Many stakeholders reported that they had not even been contacted as part of the review.”

The government accepted the report’s recommendations, and introduced the Bail Amendment Bill 2014 (NSW) to the NSW Legislative Assembly on 14 August. It passed both houses by September, and came into force in February 2015. Hatzistergos was appointed by the Coalition Attorney General as a District Court Justice on October 2014.

The original Bail Act 2013 provided in its purpose in section 3 that when the bail authority makes bail decisions, they are “to have regard to the presumption of innocence and the general right to be at liberty.” This has been amended, such that the new purpose makes no reference to a presumption of innocence or right to liberty. The new scheme has been summarised in new flow charts.

In the old scheme, the inquiry into bail was whether bail was necessary to achieve certain outcomes and protect the community. Here, the first hurdle relates to “show cause” offences – a long list of serious offences. If a person is accused of one of these offences, they must “show cause” why their detention is unjustified. Thus, an extra hurdle has been created for people accused of certain types of crimes. In these cases, the onus is on the accused to person to “show cause” why detention is unjustified, rather than the prosecution having to prove the need for detention. If they fail to do so, they must be refused bail. Thus, the presumption of innocence, and in favour of liberty has been reversed. 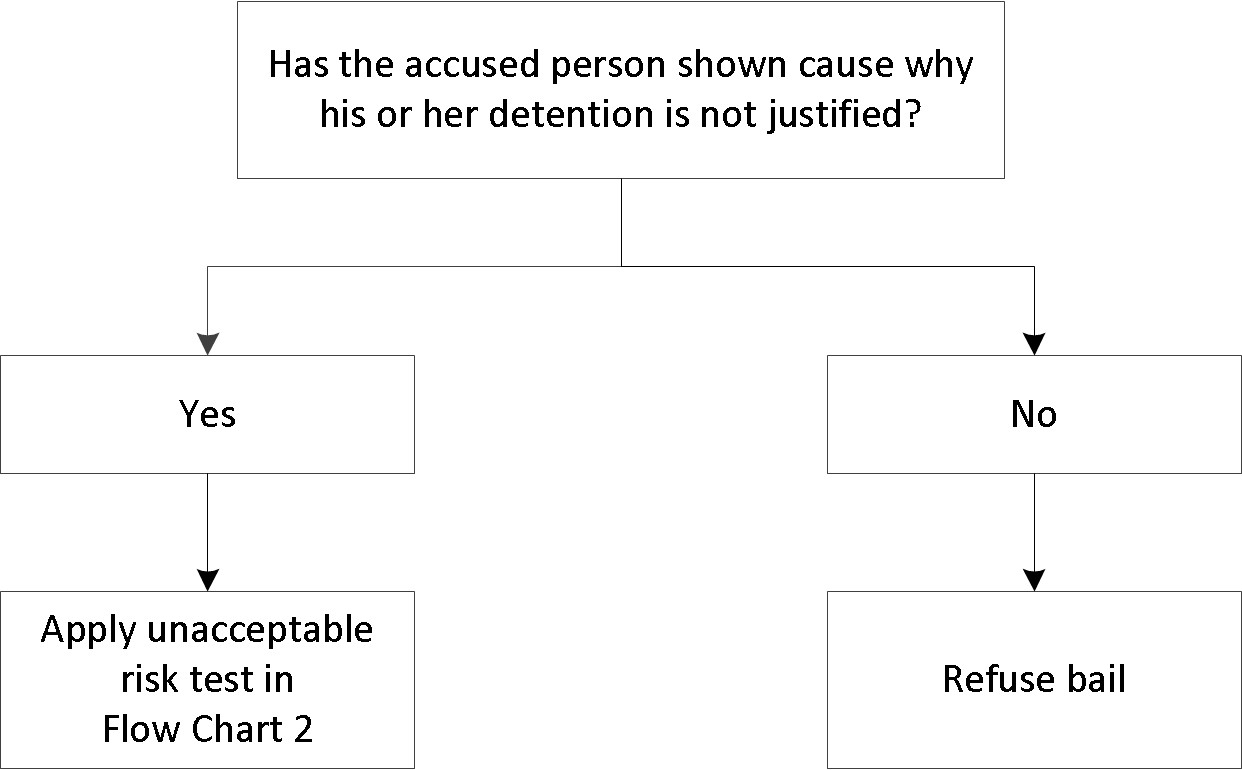 (a) fail to appear at any proceedings for the offence, or

(b) commit a serious offence, or

(c) endanger the safety of victims, individuals or the community, or

(d) interfere with witnesses or evidence.

Whereas under the previous regime, the accused could still be released, if conditions mitigated those risks, now the accused must be refused bail.

If the accused has shown cause why detention would be unjustified (where the accusation is a show cause offence), they have shown they do not present an unacceptable risk, the bail authority must then consider bail concerns before making their decision. Bail concerns include a long list of matters, such as the seriousness of the offence, the strength of the evidence, and the background and history of the accused person. If there are bail concerns, they may then be imposed, though the bail authority needs to be satisfied that they are reasonable, proportionate, appropriate, and not more onerous than necessary. 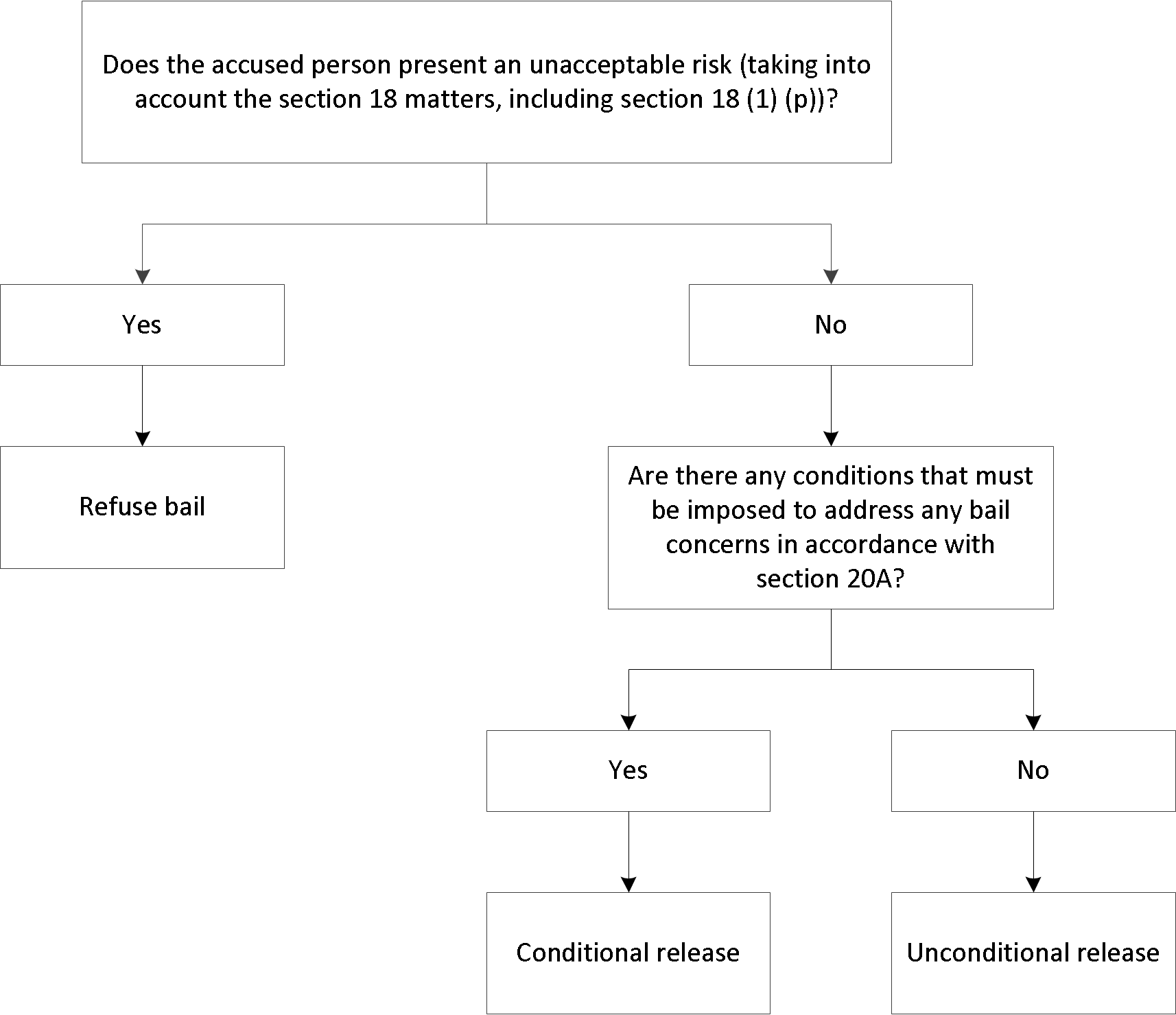 It may be noted – where previously, bail conditions were imposed to mitigate unacceptable risks, now conditions are imposed to address for the lower threshold of bail concerns, such as a person having criminal associations.

That is, a more complex process has been devised, and each step of the way, it slants towards detention of the accused. In the previous scheme, a person could only be detained if there were unacceptable risks, and conditions could not sufficiently mitigate those risks.

As seen, the purpose of the reforms to the Bail Act 2013 was to make it harsher. Making it harder to release people accused but not convicted of crimes has meant that more people are detained on remand. This includes over 200 people last year imprisoned after being denied bail, yet ultimately acquitted of any offences.

The evidence has been clear that since the second round of Liberal reforms to bail laws in 2014, more people have been refused bail. In 2016, the Guardian reported

Crime statistics released on Thursday showed the NSW adult prison population grew by 9% between April 2015 and March this year, to a new record high of 12,390 inmates.

The population has increased by 15% in the past two years, largely due to the growth in the number of prisoners on remand that followed changes to the state’s bail laws in May 2014.

The director of the Bureau of Crime Statistics and Research (Bocsar), Dr Don Weatherburn, said the new laws had led to a sharp increase in the number of defendants refused bail at their first appearance.

MP David Shoebridge observed that “The trend line from February 2011 to May 2016 shows an increase from around 1,000 people refused bail at their first court appearance per month, to around 1,340 or a more than 30 percent increase.”

Likewise, a 2018 BOCSAR study observed that the new laws “increased  the  probability  that  the  average  defendant  is  refused  bail by the courts by about 11 per cent. This represents an additional 1,500 bail refusals by NSW courts in the 2-year post reform period.” The authors estimated that “in the 2-year period after the legislation was introduced there were 1,500 additional bail refusals by NSW courts for non-minor offences.”

Due to these reforms, adults and children are being imprisoned for crimes they have not committed. The fact that a person has been accused of a serious crime does not mean that they should be treated as a serious criminal. Yet many people denied bail are held in custody for months. For people tried before the District Court or Supreme Court, these delays can amount to over a year, or even longer. 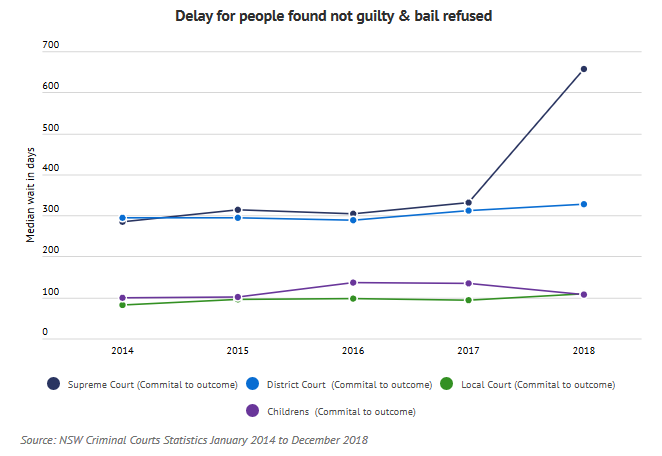 Imprisonment in those circumstances is unacceptable. The government should amend the Bail Act 2013, such that it reverts to the legislation originally passed by the Liberal government in 2013.