President of the CCL, Pauline Wright said, “It is unacceptable that the immigration authorities have the power to cancel a visa and deport someone, or condemn them to a life of detention, without proper accountability. Such decisions can ruin a person’s life, yet there is no merits review when the Minister considers whether to intervene in the decision-making. The threatened deportation of an Aboriginal man who happened to be born overseas but came to Australia as a child demonstrates anew the dangers of such oppressive visa cancellation powers.”

According to the Department of Home Affairs, visa cancellations have increased by over 1400 percent between 2013-14 and 2016-17 financial years. This is at least partially due to legislative amendments to the Migration Act that have given greater powers to the Department and Minister, who can cancel or refuse visas for minor offences.  Wright said, "The Minister can even consider whether to refuse or cancel a visa, by ‘having regard to… the person’s past and present general conduct.’ No government official should have such broad discretion to ruin someone’s life.” 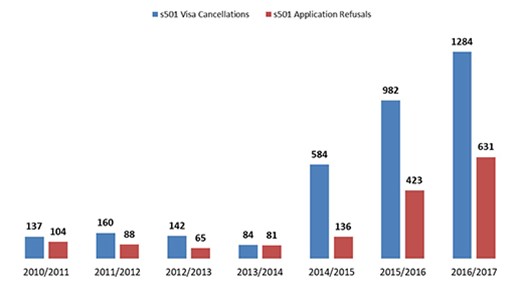 The government is currently advancing the Migration Amendment (Strengthening the Character Test) Bill 2018. The effect of this Bill would be to make it even easier for the Minister to consider cancelling the visa of a person convicted of a designated offence, even where the offence was judged so trivial that no sentence has been imposed.

Wright said, "It is beyond time that we reform our draconian system, so that visas cannot be refused or cancelled on trivial grounds, and so that any such decision is not made by the Minister alone but is made subject to tribunal and judicial oversight. It is unthinkable that an Aboriginal person who spent his childhood and adult life in Australia could be deported from his ancestral country because he happened to be born overseas.”

Contacts in relation to this statement.