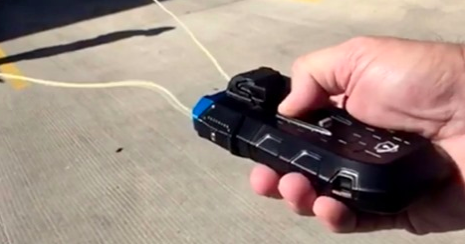 The US-designed BolaWrap 100 restraint is being considered as a painless alternative in some situations to the Taser stun gun. The restraint has been demonstrated to police in NSW, Victoria, Queensland, Western Australia, and Tasmania as well as to officers from the Australian Federal Police.

The NSW Council for Civil Liberties has told nine.com.au the device was a welcome alternative to being shot by a police gun or a Taser.

"The BolaWrap 100 is certainly a welcome alternative to the service revolver and the Taser. It is clearly preferable to Tasers in the sense that it does not inflict continuous pain on the apprehended person," Eugene Schofield-Georgesen, NSWCCL's vice-president, said.

But he stressed the device should only be used "as a tool of last resort" in accordance with police guidelines.

"However, it is a weapon and all weapons contain the potential for harmful misuse and abuse when provided to civil authorities."