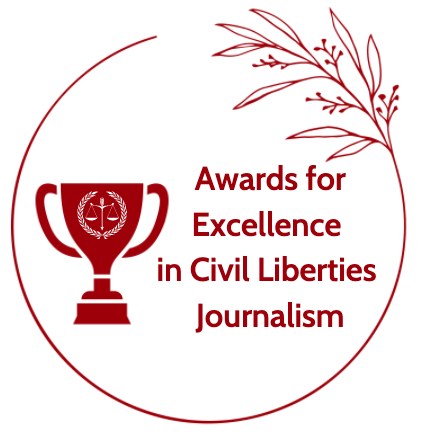 Our judges are reviewing the 2020 entries in the NSWCCL Awards for Excellence in Civil Liberties Journalism and formulating a list of finalists. The entries spanned a variety of platforms/outlets and media - from podcasts and digital, to traditional news.
The winners will be announced as part of our annual fundraiser which, this year, will be held online as a panel discussion webinar. Two winners will be announced - one in the open category, and one in the young journalist category.

We invite you to join us on the evening of Friday, 11th September at 6:30pm to watch the panel discussion, and afterwards for the award announcements.

You can register HERE - https://www.nswccl.org.au/tickets_2020_nswccl_fundraiser

We represent a vast group of community and civil society partners and leaders in New South Wales (NSW) who place on the public record our strongest opposition to NSW One Nation’s Education Legislation Amendment (Parental Rights) Bill 2020. This legislation, introduced to the NSW Parliament by One Nation’s Mark Latham, aims to outlaw the teaching of gender diversity and the acknowledgement of trans and gender-diverse students and their families and seeks to strip professional accreditation from any teachers and school staff breaking such a law.

INQUIRY INTO THE EXEMPTION OF DELEGATED LEGISLATION FROM PARLIAMENTARY OVERSIGHT

The New South Wales Council for Civil Liberties welcomes the opportunity to make submissions to the Senate Standing Committee for the Scrutiny of Delegated Legislation with respect to its Inquiry concerning the exemption of delegated legislation from parliamentary oversight.

NSWCCL commends the Committee’s resolve to meet regularly during the recent period of parliamentary adjournment to ensure its continued scrutiny of all delegated legislation, particularly disallowable executive-made COVID-19 instruments. There are significant constraints on the capacity of the Committee to scrutinise particular legislative instruments exempt from parliamentary disallowance, but it is nonetheless performing a very valuable role in flagging ‘framework’ issues.

The Australian government’s response to the COVID-19 crisis has been enabled by the provision of extraordinary powers to Executive Government and Government agencies. This has been achieved largely through the mechanism of determinations under the expansive human biosecurity provisions of the Biosecurity Act 2015 (Cth). As of 6 July 2020, there were 199 specific COVID-19 ‘instruments’ and, of greatest concern, at least 42 of these are not disallowable, denying the Committee the ability to scrutinise them.[1]

The Committee is empowered to scrutinise delegated legislation subject to parliamentary oversight against its 12 technical scrutiny principles (Senate Standing Order 23). These principles include whether the legislation unduly trespasses on personal rights and liberties. However, many of the determinations exempt from parliamentary disallowance are having a significant impact on individual rights and liberties, effectively contain serious offences and impose obligations to do or desist from certain activities. As we understand it, the Committee has no power to scrutinise whether particular pieces of delegated legislation should in fact be disallowable under the current standing orders.

The NSWCCL submission makes 7 recommendations to the Standing Committee.

NSWCCL’s annual fundraiser for 2020 will be a bit different to other years. This year we have decided to hold a virtual panel discussion rather than an in-person event due to COVID-19 health concerns.

We would like to invite you to join us for a very special online panel discussion. The panel will focus on First Nations justice and civil liberties challenges for Indigenous Australians. The discussion will be moderated by the 2019 winner of the NSWCCL Award for Excellence in Civil Liberties Journalism, Richard Ackland AM.

Mark your calendar for the evening of Friday 11th September.

NSWCCL has concerns regarding claims that a critically ill man from the New South Wales South Coast has twice been denied an exemption from undergoing hotel quarantine in Sydney, despite medical advice he self-isolate at home.

The ABC reported (8th July) that Stephen Evans, diagnosed with stage four oesophageal cancer in 2018, recently returned from Germany where he had a highly specialised lung procedure. NSW Health has twice refused Mr Evans’ request to self-isolate at home, stating that personal health circumstances must be balanced with ‘the requirement to implement the Public Health (COVID-19 Air Transportation Quarantine) Order 2020’.

NSWCCL made a detailed submission to the Senate Select Committee on COVID-19 in June. We lobbied for the formation of this important Committee as a way of providing otherwise absent parliamentary scrutiny of the Government’s huge response to the COVID crisis in the disturbing absence of regular parliamentary sittings.

We are pleased that the Committee, which has wide terms of reference, began its work immediately on its formation both by calling for this Inquiry and initiating public hearings – in the first month largely with Government agencies and ministers.

The NSWCCL is grateful that the Commissioner and his deputy were willing to engage in meaningful and open dialogue with us. We consider this meeting and the willingness of the Commissioner to engage in future dialogue to be a positive development and an opportunity for constructive discussion in relation to the issues which are important to the Council’s principles and values.

We will continue to advocate strongly for improvements and reform in relation to law, policy and internal policies and guidelines which are relevant to policing and to work with the community to strengthen and protect civil liberties and human rights in NSW.

NSWCCL has written to a number of Senators, members of the Legal and Constitutional Legislation Committee, regarding the inquiry into the Migration Amendment (Prohibiting Items in Detention Facilities) Bill 2020.

The Refugee Action Collective of Victoria (RACV) has proposed that the Legal and Constitutional Committee ask the Department of Home Affairs a large number of questions about matters of fact before they meet on July 3.

Although the New South Wales Council for Civil Liberties believes that there are strong grounds for rejecting the Bill outright that are for the most part independent of the matters that the RACV raises, we nevertheless urge you to do as the RACV requests.

Failure to present relevant facts until parliamentary committee hearings are underway, or by taking questions on notice, till after those hearings are complete, prevents transparency, and betrays a lack of commitment to democracy.

In addition to the question the RACV ask, NSWCCL requested the Senators to also ask:

How many landline telephones are available in each compound or separate section of each detention facility? For what hours are they available? And how many detainees are there in each of those facilities?